Since the introduction of market reforms that opened up the country to foreign investment in the late 1980s, Vietnam has become one of the fastest-growing economies in the world, averaging annual GDP growth rates of 7-8% throughout the nineties. Agribusiness production has nearly doubled over the past two decades, transforming Vietnam into one of the world's largest exporters of rice and shrimp. Currently, Vietnam is in the midst of a transformation from a manual labor/agrarian-based economy towards one fueled by skilled-labor. Agriculture production has decreased 5% to account for 20% of GDP over the last five years, while the government has begun to provide incentives for hi-tech companies -- such as Intel, Canon, and Samsung -- to bring skilled manufacturing jobs to Vietnam. 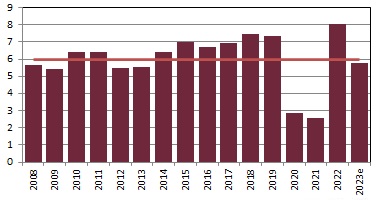 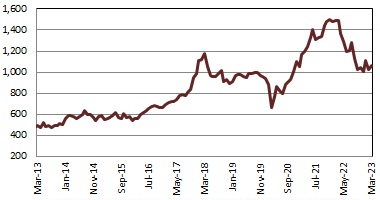 Established in 2000, HOSE currently lists 502 securities and has a market capitalization of USD 162.1 billion as of December 2020. Originally named the Ho Chi Minh City Securities Trading Center (HoSTC) the exchange was officially inaugurated on July 20, 2000, and trading commenced on July 28, 2000. Initially, two equity issues were listed, Refrigeration Electrical Engineering Joint Stock Corporation (REE) and Saigon Cable and Telecommunication Material Joint Stock Company (SACOM). In the beginning, an overall foreign ownership limit of 20% for equities and 40% for bonds was implemented. In July 2003, in a bid to improve liquidity, the government raised the foreign ownership limit for equities to 30% and totally removed the foreign ownership limit of a particular issuer’s bonds. Foreign participants on the Stock Trading Center of Vietnam must register through a custodian licensed to hold securities on behalf of foreigners. Once registered, a securities transaction code is issued to the foreign investor that will permit securities trading. On 8 August 2007, HoSTC was renamed and upgraded to the Ho Chi Minh Stock Exchange.

Hanoi Stock Exchange (HNX), formerly the Hanoi Securities Trading Center (Hanoi STC), was launched in March 2005 and handles auctions and trading of stocks and bonds. The "Hanoi STC" was renamed to the Hanoi Stock Exchange in 2009. It was the second securities trading center to open in Vietnam after to Ho Chi Minh City Securities Trading Center. The HNX hosts 355 companies and has a market capitalization of USD 9.4 billion as of December 2020.