Although the least densely populated country in the world with less than 3 million people living in a land area of 1.5 million km2, Mongolia has the potential to see the greatest growth of any country within the AFC Asia Frontier Universe. Mongolia’s economy is traditionally based on herding and agriculture, but is expanding aggressively due to foreign investments in large mining projects that capitalize on the country’s vast deposits of coal, copper, gold, tungsten, tin, nickel, zinc, silver and iron. Real GDP is expected to expand by 8.4% in 2015 and this should accellerate sharply should the government resolve an ongoing dispute with a large foreign mining company. Mongolia’s growth is also steered by high levels of agriculture production and the spillover from China’s epic growth. 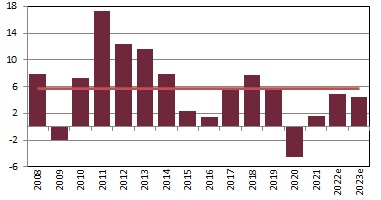 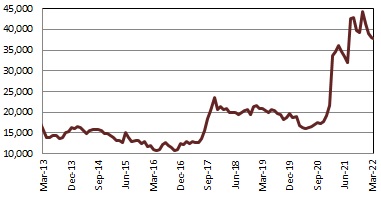 The Mongolian Stock Exchange (MSE), located in Ulaanbaatar, was founded on 18th January 1991. The history of MSE’s securities market began between 1992-1995 when 475 state owned entities were successfully privatized through MSE distributing 96.1 million shares worth 8.2 billion MNT (7.0 million USD) to the citizens of Mongolia within the framework of implementing “Privatization Policy” of the Mongolian Government during the transitional period of a central planned economy to a market economy in Mongolia. Secondary market trade began on 28th August 1995 auctioning 16,000 shares of three companies that valued 15,000 USD.

The MSE lists 168 companies and has a market capitalization of USD 2.0 billion as of December 2022.

On 3rd July 2015 the Financial Regulatory Commission (FRC) approved the "Mongol Securities Exchange" (MSX) to provide securities trading and securities settlement in Mongolia. The MSX is the first privately owned stock exchange in Mongolia and is collaborating with the NASDAQ Group. As of June 2016 two companies have applied for an IPO at the MSX. The first stock, And Energy LLC, a producer of LED lights, started trading on 13th November 2017. On 20th September 2021 the Mongol Securities Exchange introduced the UBX electronic trading platform and operates now under the name of Ulaanbaatar Securities Exchange “UBX”. However as of November 2022 only 1 company’s shares were listed/traded on the exchange.