The only double landlocked country besides Liechtenstein, Uzbekistan was the first Soviet satellite country to return to its pre-break-up GDP. This was largely due to an ambitious import substitution program, compared to other satellites which implemented free-market reforms. The result is a country with significant industry and vertically integrated natural resource production, which combined with its population of 32.5 million whose median age is 26 years, gives the country significant future potential in manufacturing, natural resource production and consumption. As such, Uzbekistan is expected to be among the three fastest growing countries in the world by 2019, after having grown 7.8% in 2016.

Previously ruled by strong man Islam Karimov since 1989, after his passing on 2nd September 2016 his successor, Prime Minister Shavkat Mirziyoyev, initiated bold reforms to liberalize the economy, comparable in some regards to those of Deng Xiaoping.

On 5th September 2017, President Mirziyoyev devalued the Uzbek Som versus the US Dollar which saw the exchange rate fall from UZS 4,210 to UZS 8,100, below the black-market exchange rate, thus eliminating the black market. Further reforms included allowing citizens to hold foreign currency, move freely throughout the country and removing thousands of citizens from a government blacklist. Currently, the government is in the process of drafting new tax legislation which could see Uzbekistan offer one of the most competitive tax environments in the region, not to mention the government’s determination to be within the top 20 countries in the Doing Business rankings early into the new decade. This policy of rapid reform and transformation from a previously closed to now open economy and society could see Uzbekistan evolve into the “Vietnam of Central Asia,” though with the added benefit of a rich endowment of natural resources ranking Uzbekistan 4th in gold reserves, 10th in copper, 11th in molybdenum, 12th in uranium and 21st in natural gas, globally. 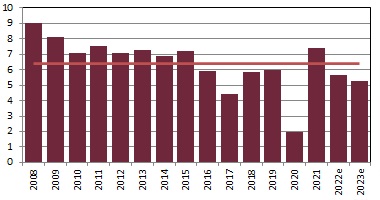 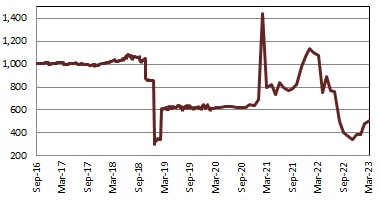 Founded on 8th April 1994, the Tashkent Stock Exchange was established for the privatization of state-owned companies which were reorganized and partially privatized throughout the 1990s. This led to a broad shareholder base and better wealth distribution amongst the population, relative to other ex-Soviet satellite countries. The Tashkent Stock Exchange lists 104 companies with a market capitalization of USD 5 billion as of November 2022 and had its first-ever IPO, Kvarts on 11th April 2018.