Iraq is an enormously wealthy country, devastated by over 40 years of wars, crippling sanctions, almost torn apart by civil strife, the save ISIS conflict, culminating in the economic disruptions brought by COVID-19.

Energy lies at the heart of the Iraq story, it is home to the world’s 5th largest proven oil reserves, at 143 billion barrels, as well as the 12th-largest proven gas reserves. However, much of Iraq is underexplored, especially in comparison to major oil producers in the region, and industry estimates suggest it could have additional 100-150 bb of reserves. Its oil industry is extremely competitive with one of the lowest production costs in the world at around $5 a barrel.

The development of these resources can fuel its social and economic development in the next few years. This is in addition to the wholesale reconstruction of the country whose infrastructure was destroyed or at best deteriorated following the traumatic events of the last 40 years. The petroleum-rich nation has attracted investment not only from major global companies but also from the World Bank and its direct investment arm the International Financial Corporation (IFC).

Since 2003 Iraq’s GDP growth has been driven by the rehabilitation of the oil sector and the country hit a 40 year high for both production in the last couple of years despite the ISIS conflict. The size of Iraq’s economy has increased from around USD 50 billion in 2005 to an estimated USD 224 in 2019. Growth in the future will also be supported by Iraq’s domestic population, which currently stands at 39 million people (estimates for 2018). The favourable demographics will enhance the development of the economy, given that the population is growing at 2.6% per annum and more than half the population is under the age of 25.

Iraq, however, faces many challenges before it can begin to achieve its potential. In the last 17 years, since the invasion in 2003, there have been issues stemming from the disastrous policies of previous governments which deepened civil strife and sown divisions within the country.

Even with ongoing challenges, Iraq’s improving security situation and foreign investment in its energy sector will contribute to developments in infrastructure, telecommunications, and transportation. Additional sectors garnering the attention of investors are consumer goods, construction and real estate, as the country faces a major housing shortage. 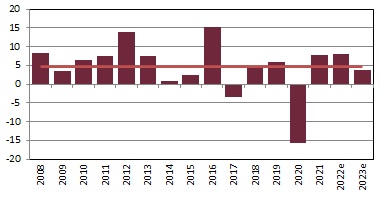 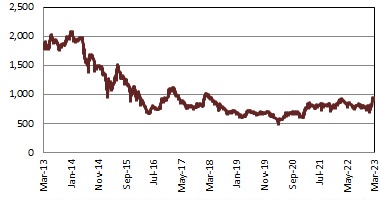 The Iraq Stock Exchange (ISX) is located in Baghdad and launched operations in June 2004 (it opened to foreign investors in 2007). Before the 2003 invasion of Iraq, the Baghdad Stock Exchange (BSE) was the country's sole stock exchange. The BSE was founded in 1991 and commenced trading in March 1992 with only one session a week and 64 listed companies by the end of 1992. The last trading day of the BSE was 19th March 2003, the day before the war to overthrow Saddam Hussein was launched. The ISX is a self-regulatory organization and is governed by the Iraqi Securities Commission (ISC) which was modelled on the US’s SEC. The exchange operates an electronic trading platform provided by NASDAQ-OMX, and the ISX currently lists 103 companies in a variety of industries including financial services, construction, agriculture, hotels and food processing. The ISX total market capitalization was USD 10.5 billion as of May 2020 and trading is held from Sunday through to Thursday. The market cap to GDP ratio is just over 5% which is significantly lower than countries in the MENA region which have this ratio at levels between 25%-90% which highlights the scope of potential developments for Iraq’s capital markets over the coming years.