Kyrgyzstan is a country of 6 million people, boasting a largely services-oriented economy. This is the result of the country’s re-export policy by importing Chinese goods and re-exporting them to their neighbors, namely Russia and Kazakhstan. Additionally, Kyrgyzstan is home to the Kumtor gold mine, operated by Canadian-listed Centerra Gold and 33% owned by the Kyrgyz government, representing 10% of GDP in 2017. Kyrgyzstan also has a significant agricultural industry which supplies its neighbors with meat, dairy and produce. Kyrgyzstan offers immense tourism potential which could help the country offset its persistent balance of trade deficit, as well as decrease its reliance on the remittances from overseas Kyrgyz workers which represents 25% of GDP. Benefitting from its free-market operating environment and limited bureaucracy, Kyrgyzstan’s GDP is expected to average 4.5% through 2020. 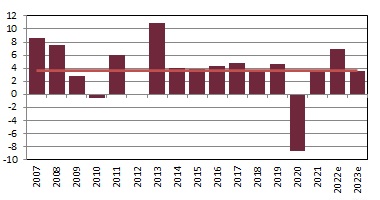 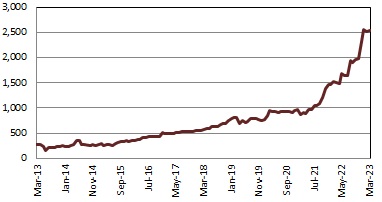 The Kyrgyz Stock Exchange (KSE) was founded in 1994 and the first stock auction took place in May 1995 as part of the government’s privatization of state owned enterprises. In May 2000 the KSE became a joint stock company and during the same year Turkey’s Borsa Istanbul became a shareholder of the KSE, followed by the Kazakhstan Stock Exchange in 2001. Currently, the KSE lists 19 companies with a market capitalization of USD 818 million as of November 2022.