After decades of political mismanagement and civil war, Cambodia has recently begun to capitalize on its economic potential. Since adopting free-market economic policies in the 1990s and increasing its integration within the international community, Cambodia’s economy has flourished. From 1998 to 2007, Cambodia’s GDP growth ranked sixth in the world (9.8%) and fastest in the Far East after China. Several factors will drive Cambodia’s continued upward trajectory. Cambodia is resource-rich with newfound offshore oil and gas deposits in the Gulf of Thailand and mineral deposits in the northern provinces. Tourism is also proliferating, as Cambodia is home to pristine beaches, world-class cultural relics (Angkor Wat) and a burgeoning eco-tourism sector. Cambodia also benefits from a young and cheap workforce and a growing middle-class. 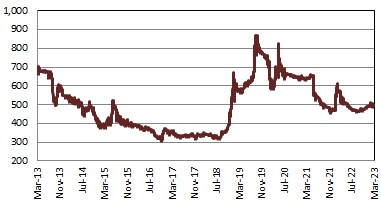 The Cambodia Securities Exchange (CSX) was established on  11th July 2011 and is headquartered in Phnom Penh and there are currently 8 companies listed (“Main Board” and “Growth Board”). The CSX held its first IPO of state-owned Phnom Penh Water Authority on 18th April 2012. The second listing on the CSX was Grand Twins International which listed on 16th June 2014 followed by Phnom Penh Autonomous Port on 9th December 2015, Phnom Penh Special Economic Zone on 30th May 2016, Sihanoukville Autonomous Port on 8th June 2017, ACLEDA Bank on 25th May 2020, and Pestech (Cambodia) on 12th August 2020 and finally DBD Engineering, the first company listed on the “Growth Board”, on 6th September 2021. The market capitalization was USD 1.8 billion as of November 2022 (ex ACLEDA Bank USD 680 million).