During October the government finally took notice of the need to develop Uzbekistan’s capital markets in order to ensure its opening of the economy is both transformative and sustainable. This was a highly encouraging development for the stock exchange, in particular, and this news coincided with the start of road show for the government’s sell down of a 5% stake in a listed glass manufacturer.

With the Uzbek Som being stable, October saw a modest increase in the month end NAV to an estimated USD 1,059 (+0.25%), according to internal calculations.

On 7th October, 2019 President Mirziyoyev held a meeting with several ministers and public agencies, including the Capital Markets Development Agency ("CMDA"), where he directed them to “consolidate all relevant laws, acts and decrees into single, simple and flexible capital markets code by the end of 2020.” The attention now being paid to the development of the capital markets is a key ingredient which in time should lead to more market depth and liquidity in both the stock market and the nascent corporate and government bonds markets.

As the government executes its privatization program by completing partial or full divestments of most SOE’s (state-owned enterprises), the stock market is the preferred mechanism for this and it is expected to lead to higher free floats and a subsequent increase in liquidity and market capitalization. The current market capitalization of the Tashkent Stock Exchange is a mere USD 4.8 bln, or approximately 9.6% of GDP, an extremely low number relative to other markets such as Singapore, Vietnam and Russia whose market capitalization to GDP are 144%, 76% and 35% respectively. During his meeting, the president instructed the CMDA to create a stock market development strategy for the period 2020 to 2025 which includes seeing the free float of the Tashkent Stock Exchange reaching 10-15% of GDP by 2022. This will initially be driven by the privatization of SOE’s. However, as SOE’s are privatized and liquidity increases, helping to instigate a re-rating in the stock market, one of the second order effects of this is private companies listing on the stock exchange in order to raise growth capital as they will be able to command higher multiples than in today’s stock market and forego high interest bank loans which currently cost 20% to 25% per year in local currency. We have already met several companies in the financial services, consumer goods and manufacturing industries which are increasingly researching the potential of an IPO.

The domestic corporate bond market is currently very immature, though one near term catalyst to reinvigorate it is the government’s desire to start holding regular auctions of T-bills and treasuries. As currently only commercial banks can buy government bonds, the market is expected to be liberalized in the coming months where local retail and institutional investors will be able to participate. By creating more demand for government debt, the government intends to create a local yield curve which will make it easier for corporates to issue debt.

A further catalyst for the development of the domestic debt and equity markets will be a change in legislation which currently prohibits banks from investing into the stock market (expected to change in the near future). With new institutional interest in the stock exchange, this could add further liquidity to the market.

This is not a surprise as FDI is increasing, construction (real estate, factories and infrastructure) is underway countrywide and gold exports have increased 260% year over year to USD 3.9 bln (representing 30% of exports). In Tashkent it is very clear that the country is growing fast, with new restaurants and shops opening almost weekly and modernization efforts such as the 70-hectare “Tashkent City” located in downtown Tashkent pacing ahead. During October the Hilton Hotel and adjacent convention centre had its completion ceremony, while the Radisson is under construction along with multiple shopping malls, office buildings and roughly 20,000 apartment units. 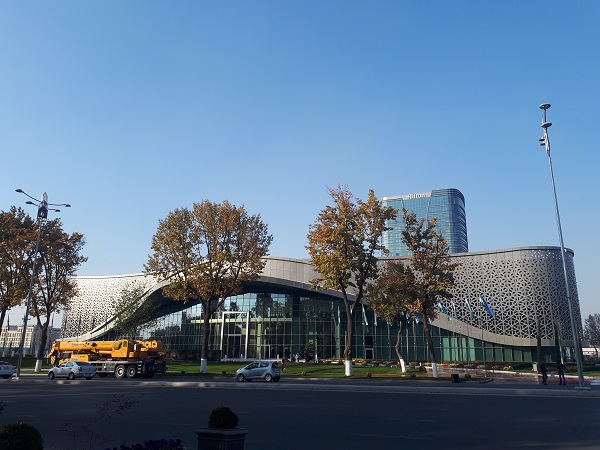 Asia Frontier Capital will be hosting its second investment tour from 29th April to 2nd May 2020. We will be taking a small group of investors to experience this wonderful country and better understand the economic and social transformation taking place on the ground today.

The Uzbekistan Investor Tour will start in Tashkent on 29th April 2020 with a welcome dinner. On 30th April and 1st May we will be conducting site and boardroom meetings with publicly listed companies in the sectors of chemicals, pharmaceuticals and financial services to understand how these businesses operate in the local capital market environment on a daily basis. For the final part of the trip, on 2nd May we will visit the ancient Silk Road City of Samarkand for the day, taking the Afrosiab bullet train around trip. This will give us the chance to absorb the unique beauty of Uzbekistan and see one of the many wonders that will attract millions of new tourists to the country in the coming years.

If you would like to join us on this tour please contact us at This email address is being protected from spambots. You need JavaScript enabled to view it. and we will provide you further information.

For further viewing here are some interesting, relevant news links related to Uzbekistan:

The next cutoff date for new subscriptions will be 25th November 2019. If you would like any assistance with the subscription process please get in touch with us at This email address is being protected from spambots. You need JavaScript enabled to view it.